South Africa is a melting pot of cultural influences and the local cuisine is a perfect example of this.

While some dishes are unique to South Africa, many of them emerged from several waves of colonialisation and immigration. These influences would include Dutch, German, French, British, Asian, Indian, Asian-Indonesian and those from Portuguese Mozambique.

Add to this the influences of Afrikaans, indigenous African cooking and the so-called Cape Malay people and you begin to get an idea of the diverse variety of cuisine.

Amasi is the Zulu and Xhosa name for fermented milk. It tastes like cottage cheese or plain yoghurt and is poured over porridge or drunk straight.

Biltong is a salty dried meat (similar to jerky). It is made from beef, ostrich or game such as kudu, springbok or other venison.

Biryani a spicy rice dish that includes spices such as cloves, cardamom, bay leaves and numerous other spices. The non-vegetarian version will include beef, chicken, goat, lamb or fish.

Bobotie is from Malay descent and is a type of meatloaf with raisins and a baked egg custard topping. Often flavoured with apricot jam and served with yellow rice and chutney.

Boerewors, a traditional Afrikaans sausage that is usually cooked on the braai (barbecue). 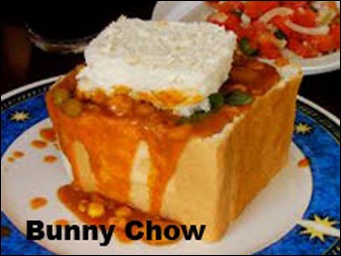 Bunny chow originated in Durban and is a hollowed-out quarter, half or full loaf of bread this is stuffed with curry.

Chakalaka is a spicy relish served alongside a main course and consists of grated carrots, green peppers, sliced onion, vinegar, chilli and that secret ingredient that will distinguish it from anyone else’s.

Chili bites are snacks normally made with chick-pea flour and water. The flour is mixed with chili, spinach, onion and then deep fried.

Chutney, called blatjang in Afrikaans, is a thick sauce made from fruit that is used to flavour meat, curry or stews.

Dhaltjies are a Cape version of chili bites.

Frikkadelle are an Afrikaans version of meatballs. Made from minced meat and onion they are usually served on rice or mash potato with a rich gravy.

The Gatsby is a Cape treat consisting of a French load filled with anything ranging from polony to chicken, fish or steak and hot chips.

Gesmoorde vis is salted cod with potatoes and tomatoes and sometimes served with apricot jam.

Isidudu is a pap (porridge) that is made from pumpkin rather than maize.

Koeksisters come in two forms and are a sweet delicacy. Afrikaans koeksisters are twisted pastries, deep fried and heavily sweetened. Koeksisters found on the Cape Flats are sweet and spicy, shaped like large eggs, and deep-fried.

Mageu is a drink made from fermented mealie pap. It is often homemade but is also sold commercially in various flavours.

Mala Mogodu is a local version of tripe. The locals usually enjoy mala mogodu with hot pap and spinach.

Malva Pudding is from Dutch origin and is a sweet, spongy apricot pudding. It is often served with custard.

Mashonzha is made from the mopane worm and is a lot more tasty than it sounds. 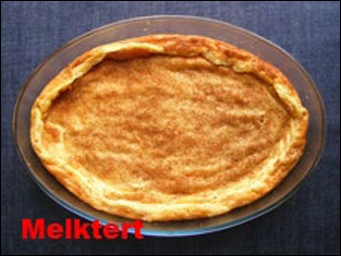 Melktert (milk tart) is a favourite Afrikaans desert. It is a pastry crust filled with a milk-based custard.

Mealie-bread is made from creamed sweetcorn.

Mielie-meal, one of the staple foods, often used in baking but predominantly cooked into pap or phutu.

Morogo is a type of wild spinach.

Ostrich is an increasingly popular protein source as it has a low cholesterol content. It is often used in stews but ostrich is now available as steaks, sausage, mince and even hamburger patties.

Pampoenkoekies (pumpkin fritters) consist of a mixture of flour and mashed pumpkin with an egg to bind it. It is then fried until golden brown.

Potbrood (pot bread) is a savoury break that is baked in a round, cast iron pot and cooked over the coals.

Potjiekos is a traditional Afrikaans stew made with meat and vegetables and cooked over coals in cast-iron pots. People take their potjiekos very seriously and many have recipes that are closely guarded secrets. Potjiekos competitions are also very popular.

Rusks, a rectangular, hard, dry biscuit eaten after being dunked in tea or coffee; they are either home-baked or shop-bought.

Samosas or samoosas are triangle shaped Indian pastries that are fried. There are usually stuffed with curry or spicy fillings that could include beef mince, chicken, fish, potato or various other fillings.

Skilpadjies are lamb’s liver wrapped in netvet and braaied over hot coals.

Smagwinya are dough balls that are deep fried.

A smiley is a sheep’s head that is cooked over the coals. Once it is done it is split open and eaten.

Smoked or braaied snoek is very popular in the Western Cape. Snoek is a regional game fish. Many people will go and buy snoek direct from the boats as they arrive in the harbour or buy it from fishermen.

A Sosatie is a marinated kebab that is done on a skewer and then cooked over the coals.

Tomato bredie is a lamb and tomato stew. Traditionally an Afrikaans dish, it is enjoyed by most South Africans.

Trotters and Beans are a favourite in the Western Cape. Made from boiled pig’s or sheep’s trotters and onions and beans. 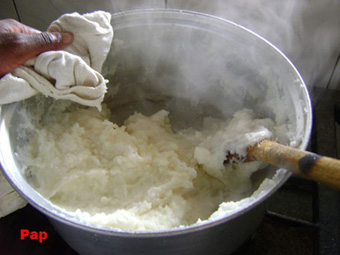 Umngqusho is a dish made from white maize and sugar beans, a staple food for the Xhosa people.

Umphokoqo is an African salad made of maize meal.

Umqombothi is a type of beer made from fermented maize and sorghum.

Umvubo is sour milk mixed with dry pap, commonly eaten by the Xhosa.

Walkie Talkies are grilled or deep fried chicken heads and feet, most popular in townships and sold by street vendors, sometimes in industrial areas with high concentrations of workers.

No matter what your taste, South African cuisine has something that will appeal to most palates. So why not be a bit daring and taste something new from our rainbow menu? Who knows, you may even get to like it. 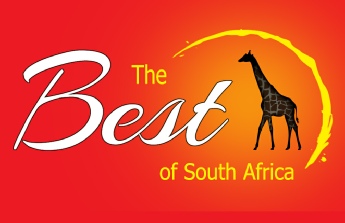